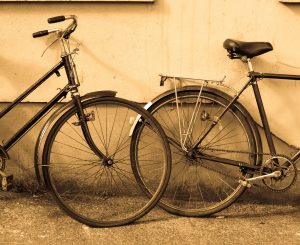 Last week I saw a mother and her two small daughters learning to ride their bikes together while attempting to get their dog to walk along. I’m still shaking my head over the out-of-control situation. It may have been one of the most dangerous things I’ve seen in a very long time.

The only good thing I saw was that the humans were wearing helmets! The girls were wobbling around, the mother looked unsteady on the bike, and she was holding the dog leash in her hand – and the dog was pulling her sideways, nearly causing her to fall.  Fortunately, there was little traffic on the road.

The whole scene reminded me of one of the most important things my successful clients do. They focus their dog training on one thing at a time. They build a foundation and then add behaviors/skills to the foundation like the building block theory. Instead of teaching their dog to stop digging and chewing and start sitting and coming when called, they focus on mastering one skill at a time. Like many humans (my wife says particularly men), dogs can only focus on one task a time initially.

In this situation, I would have broken their training into steps like this:

Instead, if another dog walked by, the dog could have gone screeching after him. He would have yanked the Mom off the bike or dragged her after him, causing the girls to be left alone. A disaster in the making!

Even with some dog guidance, I wonder if it’s a good decision.  There were a whole lot of things that could go wrong in this situation – especially since they were riding on a neighborhood street.

That’s why we do all our training in-home, where there are fewer distractions for your dog. Once your dog has mastered his inside behaviors, then we can move outside. Don’t try and introduce your dog to too many situations at a time. When you’re training your dog, I always recommend breaking it down to as many steps as you can.  You’ll be more successful if you do.