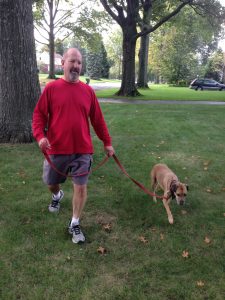 As an in-home dog trainer, I have odd hours.  After all, I’m trying to fit into my clients’ busy schedules.  My friends have heard me say I have to go home at an early hour because I work when most “normal” people are home from work.

Do you have to walk your dog in the wee hours to avoid other dogs? Or do you walk late at night so your dog won’t lunge at other dogs?

My dogs Maksim and I have the good fortune to walk at all times of the day and night.  When we’re out very early, I can sense the disappointment of some other dog walkers in the neighborhood.  They’re up early, deliberately trying to avoid encountering another dog and/or person, afraid their dog might get into a tussle.  I feel bad because Mak and I have disrupted their normal routine.  It’s terrible that they’ve gone to a lot of effort to attempt to have a pleasant walk with their dog alone.

Walking at 5:00 a.m. or late at night must be a huge hassle.  And I admire those dog parents who make sacrifices to avoid distractions that upset their dog.  But working with an in-home trainer can help them walk in their neighborhood at any time they want.  You don’t have to be afraid that your dog will see a critter and run off. Or they will run into the street chasing the garbage man. Or maybe the neighbor’s dog that is NOT well trained.

A trainer can help the parent and dog to walk without being fearful.  I love helping clients have well-mannered dogs that are focused on them rather than the distractions.  And the clients love not being pulled down the street and not having their dog barking and lunging at “stranger danger.”

If you’re one of the folks I’ve described, please get some help walking your dog gently at your side a few steps behind. You’ll love him even more when he walks nicely with you in broad daylight! 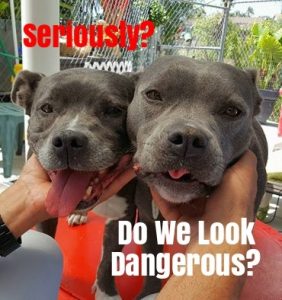 The other day I had the good fortune to train the cutest puppy. Definitely rambunctious and full of energy! He was nipping and chewing everything in his path and had managed to unroll three rolls of toilet paper before being caught. We worked on some basic obedience in addition to not charging the front door as soon as the doorbell rang. Those adorable eyes stared at my client as if to say: “how dare you correct me”!

His breed? A pitbull.

I am often asked if it is harder to train pit bulls.  They are genetically dangerous, correct? Wrong! They are bad around children? Double wrong. In fact, pit bulls originally were bred as “nanny dogs” in the late 19th and early twentieth century because of their love and devotion to children. If you had a pit bull you felt your children were safe.

With all the myths that abound, here is the brutal truth: dogs aren’t born mean. It’s their pet parents that make them that way either purposefully or inadvertently.  Like babies, most puppies are born as a blank slate, all lovable and cuddly. Too often dogs become aggressive simply due to miscommunication with their parents. A dog’s upbringing, the way he is trained is the most important factor in determining if he is aggressive or not.

Have a prong collar on your dog? You just taught him to be aggressive. Do you hit your dog when he does something wrong? Again, a bad role model to emulate. Some people train pit bulls as guard dogs for illegal activities, then wonder why the dog bites anyone who enters the property.

So where did pit bulls get a bad rap as a “Bully breed”?

Unfortunately it stems from some misconceptions and the way the media blows things out of proportion. If a pit bull attacks its owners it makes national news. If twelve Labradors attack 12 different people, you’ll never hear about it. Michael Vick made “pit bull fighting” headlines and the uproar hasn’t died down.

I have trained many pit bulls over the course of my dog training career. There is nothing to indicate that they can’t be as sweet, well-behaved and loyal as other breeds of dogs. One of the most tolerant, smartest, patient, gentle breed of dogs is now being portrayed as the most dangerous, resulting in 6,000 pit bulls being put to death every day, by far the highest number of any other breed.

Before pit bulls garnered a bad reputation it was Dobermans. Then it moved to Rottweilers and German Shepherds. All these myths were proven wrong.

Here’s the simple truth. Don’t make the mistake of judging a dog by its breed or color. Don’t make sweeping generalizations. And please, don’t give up on your dog – no matter the breed – call me!