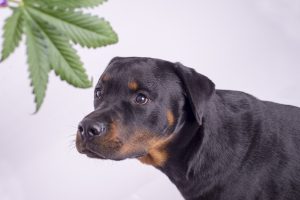 In a prior blog we discussed the preliminary advantages of CBD oil on dogs.  CBD is a non-hallucinogenic component of marijuana. However, if you have marijuana around the house or even smoke marijuana, know that it can be harmful to your dog.

Effects of Marijuana on Dogs
Can dogs get high from ingesting marijuana or even second-hand smoke? It’s absolutely possible and the effects can even be more dramatic in small dogs. In high quantities it could be life-threatening. Your dog may start acting paranoid, lethargic and over reactive.

What to Do
What should you do if your dog has ingested marijuana? To be on the safe side, induce vomiting or take him to the vet.  Be frank with your veterinarian. Without full disclosure you dog may be tested for other poisons, which can be expensive.